Are ASEAN House Prices Accelerating? Is this the Blow Off Top in the ASEAN Real Estate Market?

Singapore's home prices which have been declining for fourteen straight quarters, have resumed their upward trend. Home prices have rebounded by 5.46% off the low of 166.15 as of the first quarter of 2018. However, home prices are still  75.22% above their year-end 2004 levels. Overall prices levels, as measured by inflation have just increased by 31.45% since year end 2004.  In other words, for the past ten years, Singaporean home prices have outpaced inflation by almost than 40 percentage points. 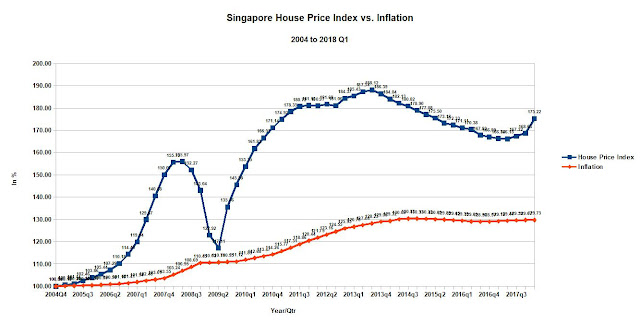 
In Thailand, which has been experiencing political turmoil for some time, home prices have remained essentially flat since the end of 2004. Home Prices ended 2013 with the index at 100.54, just 0.54% higher than the end of 2004, but showing a substantial recovery since the recent low of 74.08 posted in the third quarter of 2009. In the first quarter of 2018, home prices have rebounded to 122.61, or 22.61% higher than its year-end 2004 levels, way below its expected inflation adjusted levels. General Price levels are 35.20% above their year-end 2004 levels. In other words, Thailand Home Prices have lagged inflation by as much as 12.59% since their year-end 2004 levels.

Hong Kong real estate prices have reached a staggering 446.68 as of the first quarter of 2018 from a base of 100 since year-end 2004. General inflation levels have just climbed 47.18% during this same period.  In other words, Hong Kong home prices have outpaced inflation by an astounding 29.50% during this period, the highest rate of appreciation in the countries covered in this post.

However, it is important to note that Hong Kong Home Prices have also entered into a minor correction phase, declining by 9.83% from its recent peak of 365.95 as of the third quarter of 2015 to just 329.38 as of the first quarter of 2016.  Although there was a distinct possibility that Hong Kong Home Prices entered a bear market just as it did in the aftermath of the 1997 Asian Financial Crisis, that possibility has now disappeared and the index is at an all-time high. See previous post: How low can Hong Kong Property Prices Go? Some Clues from the Not Too Distant Past

Philippine house price index stands at 248.31 at the end of the first quarter 2018 or over 148.31% above their year-end 2004 levels.  Philippine home prices, with the exception of Hong Kong, have posted the largest 10-year gains among all the countries considered in this blog post.  Like Singapore and Malaysia, Philippine home prices have outstripped inflation by around seventy-eight percentage points.  Like Indonesia and Hong Kong, Philippine home prices have so far no signs of slowing down their upward trajectory for the foreseeable future.   The question is, is this momentum sustainable?  Or will the Philippines and Indonesia follow its ASEAN neighbors, Singapore, Malaysia, and Thailand, in exhibiting plateauing or declining house prices?  That remains to be seen.

It's Official: The Current Economic Recovery is Now Much Slower Than That of the Great Depression

However, economic growth rates during the Great Depression were much more robust than that of the Great Recession, both on an absolute basis and on a per capita basis.

In truth, the economic recovery of the Great Recession has been almost imperceptible to most Americans. On a per capita bais, real GDP per Capita grew by 7.66% in the past eleven years - or roughly a compounded annual average growth rate of only 0.67% per annum. This is far less than the so-called "Hindu Rate of Growth" threshold of 1.30% per annum.  This growth rate is so slow that it is almost imperceptible.

Can we expect the same for survivors of the Great Recession in the next three years? It's possible but not probable.

Great Depression vs. Great Recession
Posted by David Carl Grimes at 9:30 PM No comments: Links to this post

Construction Gross Value as a Percentage of GDP Is Near All Time Highs! - Updated as of 1st Qtr 2018

Last May 4, 2015, we noted that Construction Gross Value (Construction GV) at 11.21% as of the year-end 2014 was already well above its historical average of 9.59% of GDP since 1990.  This ratio has run at an above average rate since 2009 and has already eaten away at the "cumulative underhang" or underinvestment in construction that has taken place since 2004, when the excessive investment in construction that took place in the mid to late 1990's was being absorbed.

Construction Gross Value as a Percentage of GDP Is at an All Time High! - Updated as of 2nd Qtr. 2017
Posted by David Carl Grimes at 9:30 PM No comments: Links to this post

What is the National Living Wage? 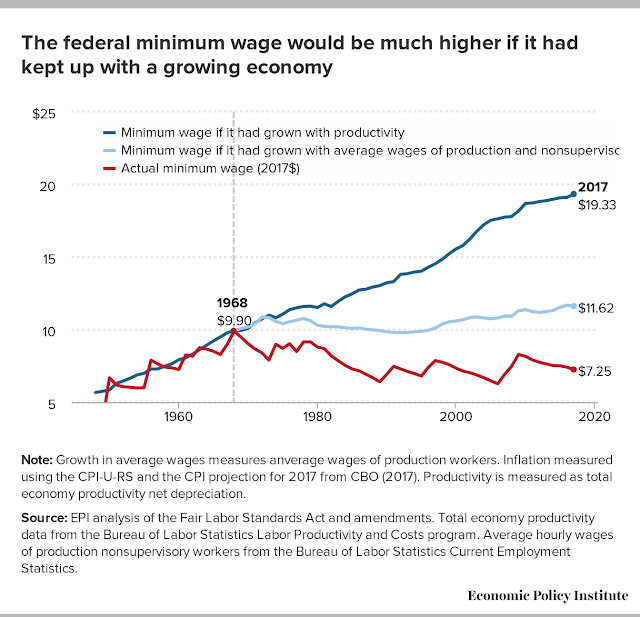 As a result of this stagnation, labor's contribution to GDP has been in steady decline. Labor as a share of GDP peaked at 66% in 1970. Today that ratio stands at just 60%, slightly higher than the multi-decade low of 59% in 2010.

A person working at minimum wage for 40 hours a week, 4 weeks per month, 12 months per year - in other words, pretty much all the time with no vacation, save for weekends - would earn just $13,920 per year or just 10% above the federal poverty levels of $12,140 for an individual. Obviously, a person working at minimum wage would not be able to sustain himself for very long.

"many working adults must seek public assistance and/or hold multiple jobs in order to afford to feed, clothe, house, and provide medical care for themselves and their families."

This reliance on public assistance puts a strain on public finances and amounts to a generous subsidy for corporations. It has become so pervasive that large corporations constantly route their workers to such programs or mount Thanksgiving collection drives for their employees.

MIT's Living Wage Calculator has calculated the living wage for every state, county, and major metropolitan area. Nationally, it estimates the living wage to be $16.07 per hour in 2017, around 7% higher than the $15 per hour minimum wage that most labor activists are asking for.

On a state by state basis, the living wage for each states ranges from a low of $10.03 per hour in South Dakota to a high of $17.11 for the District of Columbia.


When weighted by the Civilian Noninstitutional Population of each state, the National Living Wage amounts to $12.08 per hour while the weighted average federal minimum wage amounts to $8.71 per hour.

Posted by David Carl Grimes at 9:30 PM No comments: Links to this post

Where is the US Labor Market Slack and Where is it Tight?

In our last post, we explained why there has been surprisingly little wage inflation in the USA despite the persistence of a historically low unemployment rate. The simple reason for low wage inflation. There are around 8 million missing workers who dropped off the labor force.

In this post, we are trying to map out where those missing workers are by state using the pre-recession peaks in the Labor Force Participation Rate (LFPR) and the Employment to Population Ratio (EPR).

A similar dynamic plays out using the pre-recession Employment to Population Ratio.

Once again, California, Florida, and Texas have the highest absolute numbers of missing workers. On the flip side, both Massachussets and the District of Columbia have a shortage of workers. North Dakota and Vermont have a miniscule amount of missing workers.

Relative to their CNIPs, Nevada (6.33%), New Mexico (5.62%), and Wyoming (5.50%) have the highest percentages of missing workers. The District of Columbia has an acute shortage of workers (-2.28%). Massachussets is just about balanced, and Maryland's missing workers amount to 1.10% of its CNIP.

Related Post: Why There Will Be Little to No Wage Inflation: There are 8 Million Missing American Workers

Posted by David Carl Grimes at 9:30 PM No comments: Links to this post