Singapore, Malaysia, and Thailand Post Flat to Declining Housing Prices, Can the Philippines and Indonesia be Not Far Behind? - 4th Qtr 2014


Singapore's home prices have now been declining for five straight quarters, which, according to Bloomberg, is the longest losing streak in five years.  Home prices are still  78.90% above their year end 2004 levels. Overall prices levels, as measured by inflation have just increased by 30.33% since year end 2004.  In other words, for the past ten years, Singaporean home prices have outpaced inflation by almost 50 percentage points. 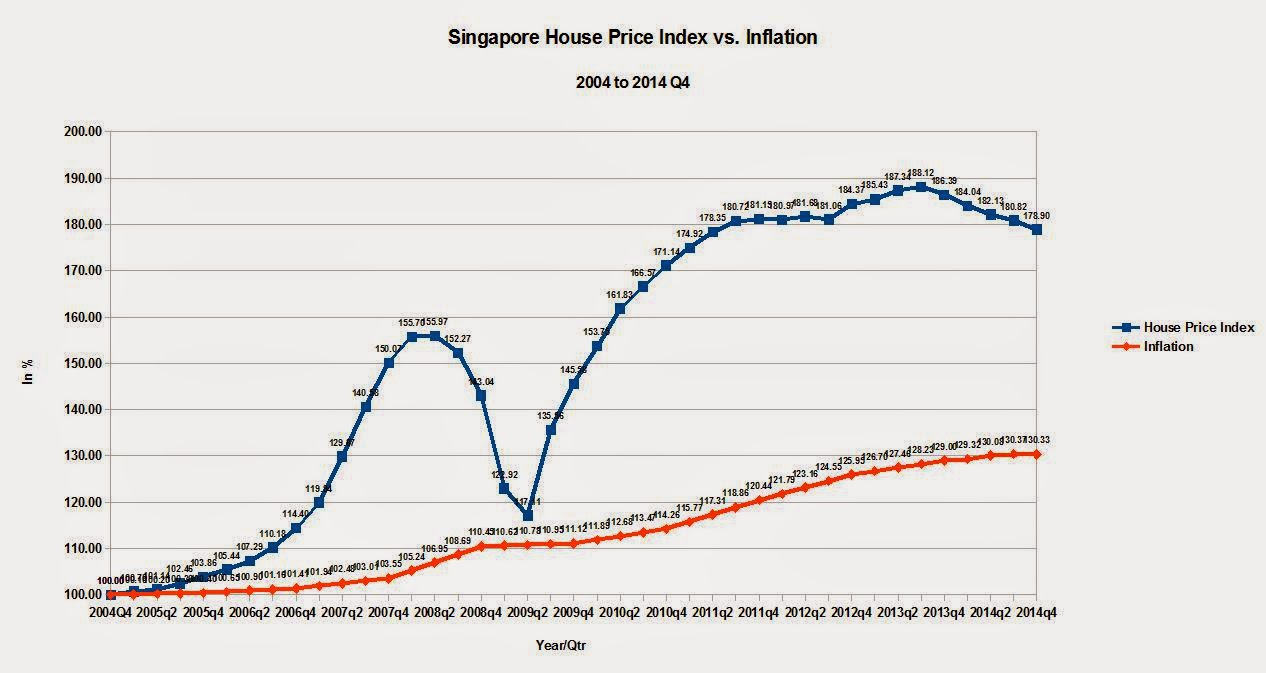 In Thailand, which has been experiencing political turmoil for some time, home prices have remained essentially flat since the end of 2004. Home Prices ended 2013 with the index at 100.54, just 054% higher than the end of 2004, but showing a substantial recovery since the recent low of 74.08 posted in the third quarter of 2009. In the fourth quarter of 2014, home prices have rebounded to 105.44, or 5.44% higher than its year-end 2004 levels, way below its expected inflation adjusted levels. General Price levels are 35.05% above their year end 2004 levels.

Hong Kong real estate prices have leaped by 219.33% in a little over 10 years to reach a staggering 319.33 from a base of 100 since year-end 2004. General inflation levels have just climbed 35.36% during this same period.  In other words, Hong Kong home prices have outpaced inflation by an astounding 183.96% during this period, the highest rate of appreciation in the countries covered in this post.

Philippine house price index stands at 210.64% at the end of the fourth quarter 2014 or over 110.64% above their year-end 2004 levels.  Philippine home prices, with the exception of Hong Kong, have posted the largest 10 year gains among all the countries considered in this blog post.  Like Singapore and Malaysia, Philippine home prices have outstripped inflation by around fifty percentage points.  Like Indonesia and Hong Kong, Philippine home prices have so far no signs of slowing down their upward trajectory for the foreseeable future.   The question is, is this momentum sustainable?  Or will the Philippines and Indonesia follow its ASEAN neighbors, Singapore, Malaysia, and Thailand, in exhibiting plateauing or declining house prices?  That remains to be seen.

Last September 29, 2014, we noted that Construction Gross Value Added (Construction GVA) at 11.20% as of the 1st Semester of 2014 was already well above its historical average of 9.48% of GDP since 1990.  This ratio has run at an above average rate since 2009 and has already eaten away at the "cumulative underhang" or underinvestment in construction that has taken place since 2004, when the excessive investment in construction that took place in the mid to late 1990's was being absorbed.

Posted by David Carl Grimes at 9:28 AM No comments: Links to this post