But are the two rates comparable? Before 1938, children were a significant part of the labor force.  In 1900, children younger than sixteen made up as much as eighteen percent of the labor force.  It was only when the Fair Labor Standards Act of 1938 became law that children younger than sixteen were barred from working in manufacturing and mining but not agriculture.

To make the numbers more comparable, it is better to get the ratio of Employment to the Total Population (which includes children). When we do this, the two measures are not so far apart.  In 1929, the year "0" for the Great Depression, 54.41% of the total population was employed.  By 1933, year "4", only 41.97% of the population was employed. But the rise in employment was dramatic.  Four years later, 47.63% of the population was employed, almost six percentage points higher. The employment momentum only stalled when the tax hikes of 1937 induced another recession in 1938 and new child labor laws barred children from the labor force.  If the momentum had continued, the employment ratio would have recovered in less than five years.


Source: www.worldbank.org, www.bea.gov, www.bls.gov,  Reinhart and Rogoff, "This Time is Different"
Posted by David Carl Grimes at 8:56 AM No comments: Links to this post

Looks like Australia's Housing Market is about to go Bust!

Judging from this Australian edition of 60 Minutes, Australia seems to be undergoing a massive housing boom, fueled, no doubt, by cheap money and lax credit standards, echoing the subprime crisis in the United States.

This has shown up in the charts, as pictured below.  In a little over 12 years, house prices in Australia have massively outstripped inflation by 135 percentage points, from a base of 100.00 in the last quarter of 2002 to 268.59 in the third quarter of 2015.  In the same time period, general consumer prices rose from a base of 100.00 to 133.0 as of the third quarter of 2015. The gap between Australian House Prices vs Inflation is one of the largest seen in recent history.  Only Hong Kong has developed a higher gap in a slightly shorter time frame. 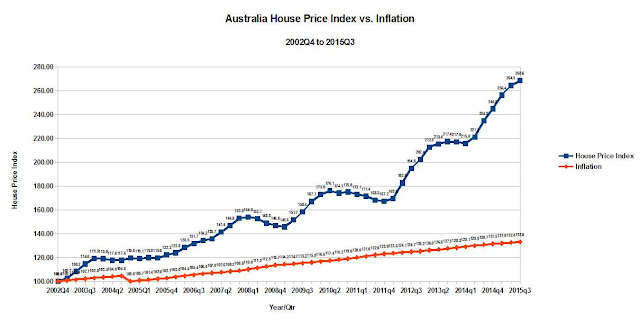 Singapore, Malaysia, and Thailand Post Flat to Declining Housing Prices, Can the Philippines and Indonesia be Not Far Behind? - 3rd Qtr 2015

Singapore's home prices have now been declining for seven straight quarters, which, according to Bloomberg, is the longest losing streak in five years.  Home prices are still  73.18% above their year-end 2004 levels. Overall prices levels, as measured by inflation have just increased by 29.89% since year end 2004.  In other words, for the past ten years, Singaporean home prices have outpaced inflation by more than 40 percentage points. 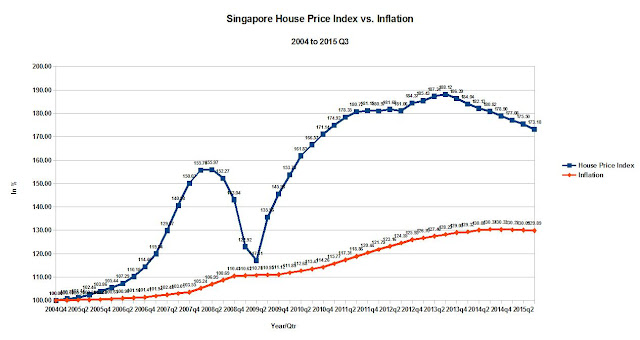 
In Thailand, which has been experiencing political turmoil for some time, home prices have remained essentially flat since the end of 2004. Home Prices ended 2013 with the index at 100.54, just 0.54% higher than the end of 2004, but showing a substantial recovery since the recent low of 74.08 posted in the third quarter of 2009. In the third quarter of 2015, home prices have rebounded to 108.63, or 8.63% higher than its year-end 2004 levels, way below its expected inflation adjusted levels. General Price levels are 34.13% above their year-end 2004 levels.

Hong Kong real estate prices have leaped by 250.31% in a little over 10 years to reach a staggering 350.31 as of the third quarter of 2015 from a base of 100 since year-end 2004. General inflation levels have just climbed 38.66% during this same period.  In other words, Hong Kong home prices have outpaced inflation by an astounding 211.65% during this period, the highest rate of appreciation in the countries covered in this post.

Philippine house price index stands at 220.11 at the end of the third quarter 2015 or over 120.11% above their year-end 2004 levels.  Philippine home prices, with the exception of Hong Kong, have posted the largest 10-year gains among all the countries considered in this blog post.  Like Singapore and Malaysia, Philippine home prices have outstripped inflation by around sixty percentage points.  Like Indonesia and Hong Kong, Philippine home prices have so far no signs of slowing down their upward trajectory for the foreseeable future.   The question is, is this momentum sustainable?  Or will the Philippines and Indonesia follow its ASEAN neighbors, Singapore, Malaysia, and Thailand, in exhibiting plateauing or declining house prices?  That remains to be seen.

Posted by David Carl Grimes at 9:06 PM No comments: Links to this post

Philippine Real Estate and Construction Loans Are Out of Whack As of December 2015!

It sure looks that way, judging from this chart:

Philippine Real Estate and Construction Loans Are Even More Out of Whack As of September 2015!

Is There a Real Estate Bubble in the Philippines?

Are Philippine Real Estate Loans Out of Whack?

Posted by David Carl Grimes at 10:10 PM No comments: Links to this post