It seems like that the real estate bubble has also burst for one of the biggest and most prestigious real estate developers in the country: Ayala Land or ALI for short.

The jump in past due ICRs becomes clearer when viewed in relative terms.

So past due ICRs and Impaired ICRs now comprise a striking 13.4% of the entire ICR portfolio.

If all the past due ICRs go bad, it will take away a nice chunk (5.88%) of ALI's Stockholder's Equity.

Source: Ayala Land 2015 Annual Report
Posted by David Carl Grimes at 9:00 AM No comments: Links to this post

One Major Reason for the Rise of the Vulgarian Rodrigo Duterte: Wealth Inequality

Let's face it.  The Philippines always has been and it seems like it will always be a plutonomy wherein a huge chunk of the economy is controlled by a very wealthy elite.  Most of the time, the masses were placated by trickle down economics, wherein the great unwashed could feed off the crumbs left by their masters at the dinner table.  As the wealthy grew wealthier, the crumbs seemed to get better.  And, very often, that was enough for the poor.

The people have had enough of crumbs.  They want a greater share of the wealth of the country and are increasingly vocal about it.  They have that found their voice in one man, an outsider, who by circumstances of his birth, rough speech, and mannerisms, is an outsider to national politics, even though he has been a long-time Mayor of Davao, the Philippines third largest city.  That man is Rodrigo Roa Duterte.  He has captured the imagination of the poor and lower middle classes with very little money and very little by way of political machinery.  Mar Roxas, the establishment candidate and grandson of a former president, remains a laggard in the polls despite all the inherent advantages of being the anointed one.  The sudden political ascendancy of Duterte has whipped the upper classes as well as the Roman Catholic Church into a state of frenzy.  Why?  Although they castigate him for his loose morals, politically incorrect jokes, and vigilante approach to justice, the real reason is that Duterte seems to be a man they cannot control the usual means, meaning money and power but mostly money.  The previous populist, Erap, was a man who loved fine wines and lots of women and lived accordingly and that was his downfall.  Duterte does not seem the same way.

Yet why are the people acting this way?  Hasn't the heady economic growth of the past two administrations satisfied the masses?

The answer, of course, is no.

The wealth has not trickled down as fast as the people would have wanted and the gap in wealth and income inequality has only increased.

The facts do bear this out.  TFhe Credit Suisse 2015 Global Wealth Report places the total wealth of the country at US$111 billion dollars as of 2015.  And Swiss bankers, who primarily serve Ultra High Net Worth Clients (UHNW Clients = Wealth > US$ 10 million), do make it their business to know how much wealth there is in each country they want to do business in.  Of this, the top decile or the top 10% have captured 76% of it.  What about the top 1%, the economic class that sparked the Occupy movement in the USA? They hold 51% of the total wealth in the country.  In 2010, when PNoy was elected, that figure stood at 43% for the top percentile.  That's an almost 20% increase during the PNoy administration alone. 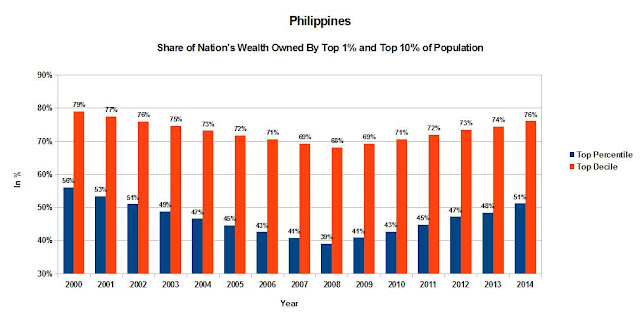 Meanwhile, the median wealth - the point at which half the population are either below or above it, has barely budged during the same time period. 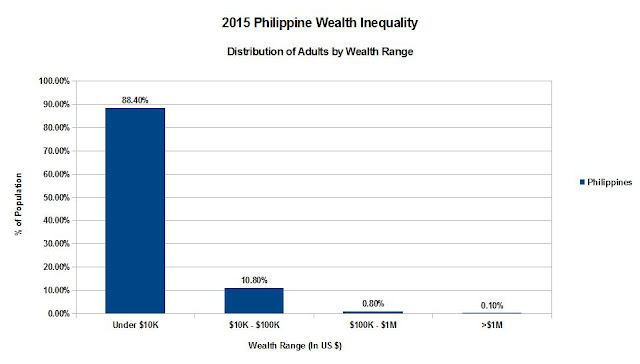 Now that is a recipe for a pitchfork revolution.
Posted by David Carl Grimes at 4:20 PM No comments: Links to this post