With a PEACe Bonds Tax, PBCom is Left Holding the Bag

In a previous post entitled: "A Tax on the PEACe Bonds - Who is Left Holding the Bag?", we estimated the impact of a Final Withholding Tax (FWT) on the PEACe Bonds on the Capital Funds of nine banks that banks that were reported to be the final bondholders of the PEACe Bonds.  In that analysis, we used news reports and the individual banks reported holdings of Government Debt Securities to estimate the size of their PEACe Bond holdings as well as the estimated impact on the individual bank's balance sheet.  Based on those estimates, we arrived at this table:


Under this scenario, the biggest holders of the PEACe Bonds were, naturally, the bigger banks like Banco de Oro and Metrobank.  The PEACe Bond Tax would take a bite of the banks Capital Funds.  The most affected banks were, from highest to lowest:

Based on new data from unimpeachable sources, we now have a definitive list of the Final PEACe Bondholders.  They are as follows:

As mentioned on this blog before, the surprise imposition of the 20% Final Withholding Tax will affect each of the banks financial condition to varying degrees.  What is clear is that:

The imposition of the tax will definitely take a bite out of the bank earnings and capital funds.  Based on their latest available Published Statements of Condition courtesy of www.bsp.gov.ph, the most affected banks are as follows:

It must be noted that of the fifteen banks in this list, nine are considered distressed (highlighted in yellow) because their Total Distressed Assets exceed their Total Capital Cushion by a magnitude of more than 1.  Since the level of their distressed assets is so high relative to their capital base, that any significant deterioration in the value of these distressed assets has the potential to take a huge chunk of the bank's capital or even wipe it out completely.

Given their precarious state of condition, it is very probable that more asset sales and/or mergers will take place, particularly among the distressed banks.  It is also highly likely that the Ongpin Group will have to infuse more capital into PBCom, particularly if the Supreme Court upholds the Philippine Governments position that a Final Withholding Tax of 20% must be imposed on the PEACe Bonds.

For a more complete list of distressed Philippine Banks, check out the following blog posts: "Export and Industry Bank Becomes Even More Insolvent! - September 30, 2011" for commercial banks and "Thrift Banks Improve Due to Survivorship Bias" for thrift banks.
Posted by David Carl Grimes at 12:37 PM No comments: Links to this post

This new post contains new information regarding the bidding results of the PEACe Bonds Auction, the first auction of zero-coupon Treasury Bonds in the Philippines and the most controversial to date.  Specifically, it contains information on the GSEDs that bid for the PEACe Bonds, how much they bid for, and at what YTMs. 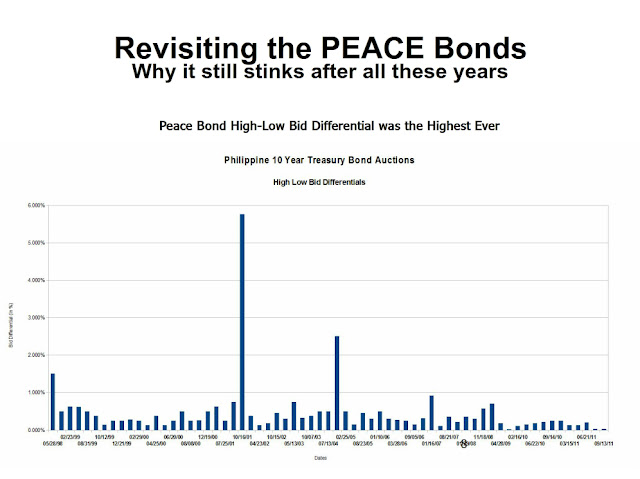 As a result of this differential, there was a huge gap in bond values between the highest and lowest bid: 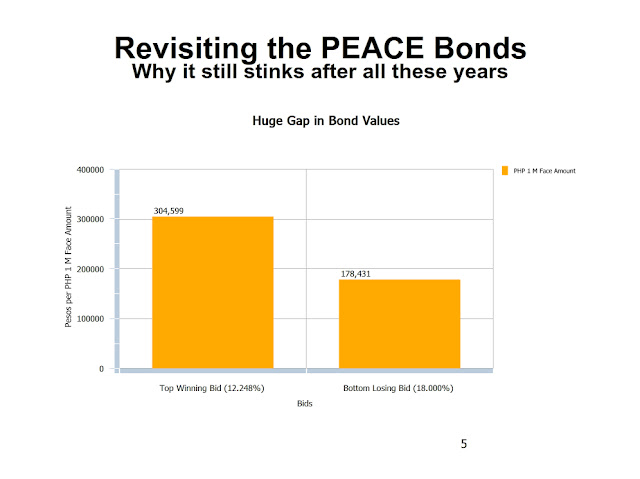 The top winning bid was 71% higher than the bottom losing bid: 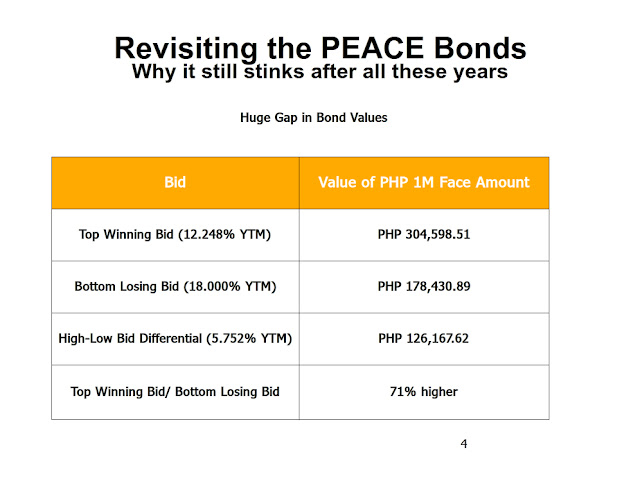 If the PEACe Bond auction bid differential had followed the historic average of only 0.422%, the top winning bid would only be 4.05% higher than the bottom losing bid: 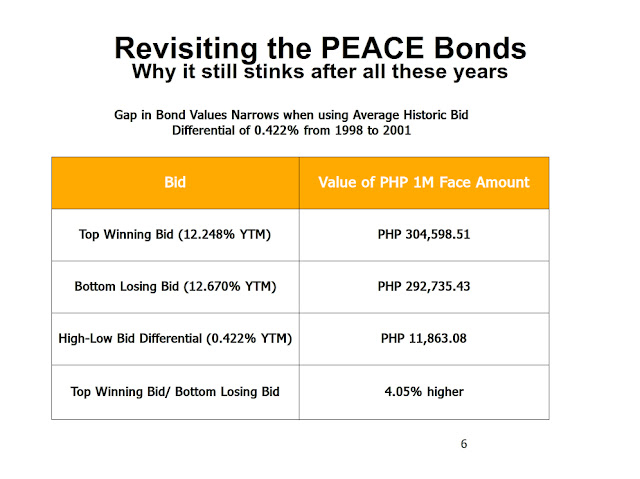 At that rate, the gap between the top winning bid and the bottom losing bid will be imperceptible. 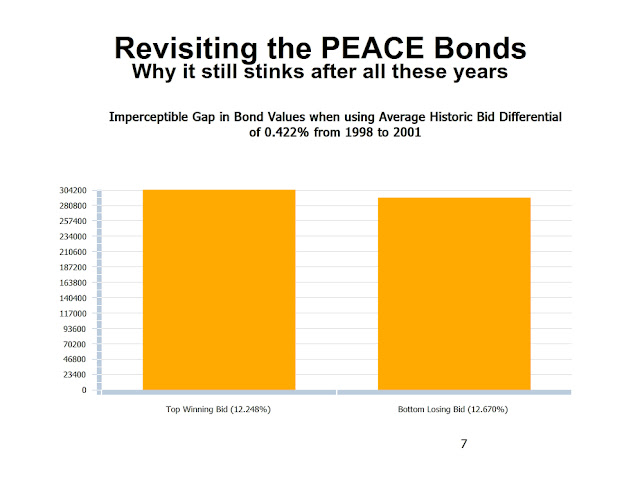 The wide High-Low Bid Differentials in YTMs and the corresponding large gap in bond values assigned by the bidding GSEDs is indicative of the following:


How did Individual GSEDs Bid for the PEACe Bonds?

Ten years ago, very little information was released on how the individual institutions bid for the PEACe Bonds.  In fact, this was all we had. 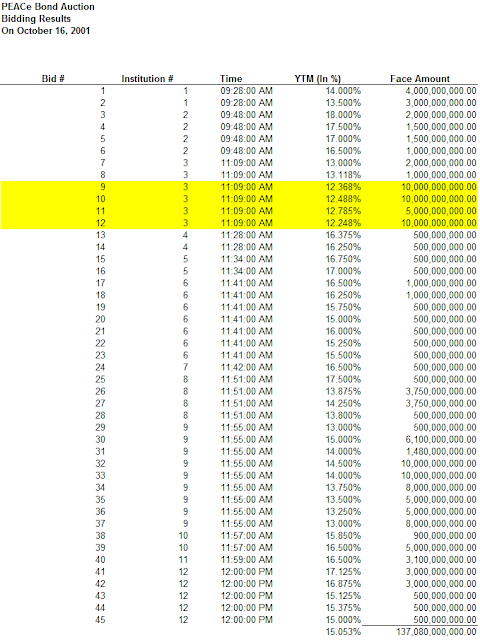 Based on recent data provided by government sources, that information is now available. The updated information can be seen below:

When the bids are sorted by GSED and by bid and YTMs, you get this table (RCBC's winning bids are highlighted in yellow):


When the bids are sorted out by GSED, by bid, and by Maturity Value, you get this table (RCBC's winning bids are highlighted in yellow).


What we know now:

What was well known ten years ago was that RCBC won the entire issue.  They had the lowest bids in terms of YTMs.  But what was not well known, until recently, was that both Global Bank and Metrobank came very close to the winning YTM bids.  If both Global Bank and Metrobank had lowered their lowest bid YTMs by 25 basis points or 0.250% or more, they would have at least tied with RCBC's fourth winning bid and possibly have won a portion of the auction.

However, only Metrobank was RCBC's only true competitor.  Only Metrobank, aside from RCBC, bid for enough PEACe Bonds to win the entire issue of PHP 35 billion.

If we compute the bond values assigned to each bid of the participating GSEDs to a PHP 1 M Face Amount of PEACe Bonds, we get this table:

Wide Dispersion of Bond Values, even within the individual GSED bids

As can be seen from the above column chart, the values assigned by GSED to the PEACe Bonds were widely divergent, even within the GSED.  A tabulation of these bid differentials within the participating GSEDs is as follows:

Metrobank came in fourth,with its highest bid 15.07% higher than its lowest bid.  Still, this amounted to as much as PHP 37,162 per PHP 1 M Face Amount.

Of the firms that submitted four or more bids for the PEACe Bonds, RCBC had the narrowest range, with the highest bid only 8.53% higher than its lowest bid.

The wide dispersion of bid YTMs and the resulting wide dispersion in bond values assigned by a participating GSED to the PEACe Bonds is indicative of a "shotgun" approach to bidding.  This indicates that some individual GSEDs, namely International Exchange Bank, China Bank, and Global Bank, didn't know precisely how to value the PEACe Bonds and as a result, cast a very wide net hoping to snare some PEACe Bonds.
Posted by David Carl Grimes at 2:00 PM No comments: Links to this post