Much has been written about how CODE-NGO has extracted PHP 1.827 billion in gross profits from the PEACe Bonds. From this bonanza, the PHP 1.338 billion Peace Foundation was born. Yet there have been hardly any articles in the mainstream press as to how much profit RCBC, CODE-NGO's financier, extracted from the transaction. RCBC Capital did extract a PHP 239 million underwriting commission. But this amount is peanuts when you consider the fact that RCBC Capital's parent, namely RCBC itself, risked PHP 11.996 billion or roughly 90% of its capital to earn a measly PHP 239 million or 1.8% of its capital. Given that interest rate fluctuations could cause the value of the PEACe Bonds to decline by PHP 1.275 billion over the course of a year, this seems foolhardy. Why? Because RCBC's risk was more than five times the potential reward. If its profits were limited to underwriting commissions, the transaction's rewards were definitely not worth the risk.

But RCBC did make money on the transaction. Lots of money. As much as PHP 4.0 billion! How? By reselling the PEACe Bonds to institutional investors at even higher prices.

“We have a contracted sale for PHP 1.2 billion [out of the PHP 35 billion worth of PEACe Bonds, which is the issue's face value upon maturity], Panganiban said. But given the publicity about the PEACe Bonds, we're not aggressively [selling them in the secondary market]. He admitted that there is demand or keen interest in the bond.1

The bonds were sold to RCBC's corporate clients outside the Yuchengco group of companies.2 Mr. Panganiban said that RCBC has been selling the bonds, which RCBC acquired at an effective cost of 34 centavos per bond unit (PHP 1.00 at maturity in 10 years), for 40 to 45 centavos to undisclosed corporate buyers.3 This translates to an effective yield to maturity rate (YTM) of 8.170% to 9.370%.

In terms of profit, this means that RCBC, by selling PHP 1.2 billion or 10% of the PEACe bonds it acquired from CODE-NGO for PHP 11.996 billion, realized a trading gain anywhere from PHP 201.32 million to PHP 374.94 million from this one transaction alone. If it continued to sell the rest of its holdings at this price, it would reap an additional trading gain ranging from PHP 1.812 billion to PHP 3.374 billion, bringing its total potential profit on the entire PEACe to PHP 2.013 billion to PHP 3.749 billion, just from reselling the PEACe Bonds. If you add back the underwriting commission, RCBC could have earned as much as PHP 4.0 billion on the PEACe Bonds.

But here's the kicker. There could have been even more profits in the offing for RCBC! Why? Two reasons. Time and Interest Rates. The prices of zero coupon bonds go up as the bond nears its maturity date. The closer the bond is to its maturity date, the closer the zero-coupon bond's value approaches par or face value. Interest rates also significantly affect the prices of zero-coupon bonds. The lower the interest rate, the higher the bond price. And interest rates did go down substantially after the PEACe Bonds transaction. And as interest rates go down, bond prices go up. So estimating RCBC's profits are also very dependent on when RCBC sold down the PEACe Bonds to other institutional investors because the bond's time to maturity and prevailing interest rates would have changed.

According to RCBC Treasurer Jimmy Panganiban, RCBC did not aggressively sell the PEACe Bonds in the secondary market because of the controversy they generated. Given that they held at least 90% of the bonds in October 2001, it is safe to assume that all the subsequent PEACe Bond transactions registered with the Bureau of Treasury's Registry of Scripless Securities were RCBC's.

Based on this chart from PCIJ's blog (http://pcij.org/blog/2011/10/25/vanishing-trade-in-peace-bonds-the-truth-the-banks-the-bir), it seems that RCBC had rid itself of its entire PEACe Bond inventory by July 2002. Or given that they recently admitted holding on to PHP 1.4 billion or 4% of the PEACe Bonds, they could have disposed of the inventory they wanted to dispose a month earlier, or June 2002.


Jaime Panganiban, RCBC's Treasurer, said that RCBC sold at least 10% of their PEACe Bond holdings at YTMs ranging from 8.170% to 9.370% soon after the PEACe Bond auction, meaning October 2001. If RCBC had sold the last 90% of their holdings at the upper end of this YTM range, meaning at 9.370% YTM by October 2001, RCBC would have reaped PHP 2.013 billion in gross profits. But they didn't. Instead, they held on. Holding on to the bonds proved beneficial to them. The bonds accrued interest and went up in value. Even if interest rates or YTMs remained constant, at the 8.170% to 9.370% YTM range, the bonds would go up in value. By how much? 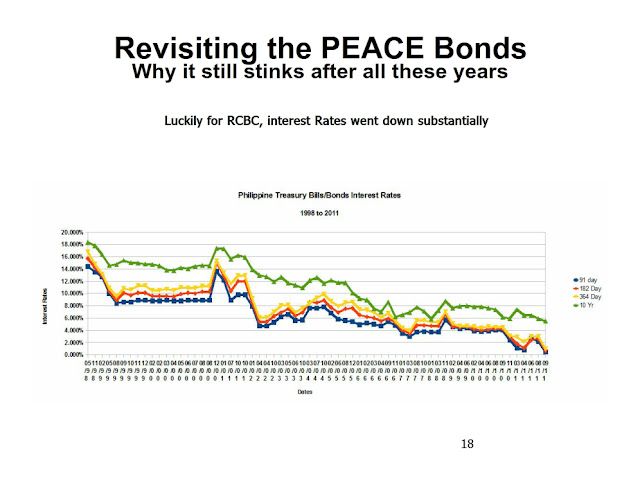 If the YTMs at which the PEACe Bonds were sold to investors declined with interest rates (with a floor of 7% - the yield of reserve eligible securities at the time of the PEACe bonds auction), RCBC's interest rate spread would be as follows:


It's highly possible that the floor of 7.000%, the current yield for liquidity reserves at the time of the PEACe Bond auction declined along with a general decline in interest rates. As such, it's very possible that RCBC's total gross profit from selling the PEACe Bonds could be even greater. However, access to that information is not yet available.

Posted by David Carl Grimes at 6:03 PM No comments: Links to this post