Have ASEAN House Prices Kept Up With Incomes?

The short answer is: yes. Throughout the ASEAN region, incomes have risen together with house prices. The only exception is Thailand, where house prices have underperformed both incomes as well as inflation. As of 2015, the Thailand House Price Index is only 15.13% higher than where it was as of year-end 2004. Incomes, as measured by GDP Per Capita, are 120% higher than they were during the same period. General prices are 33.84% higher than they were for the same period. 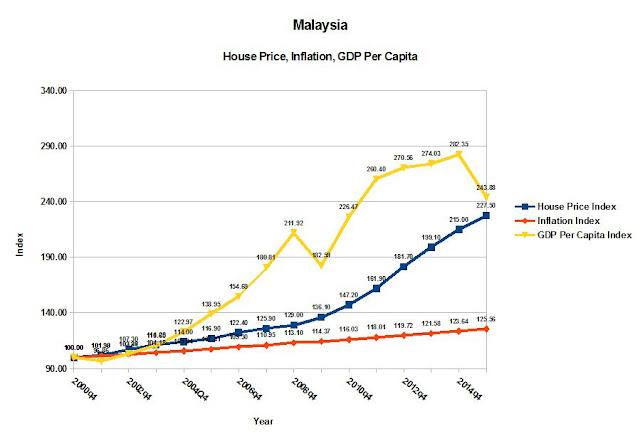 In Singapore, that gap between incomes and house prices is now only 20.66 percentage points. 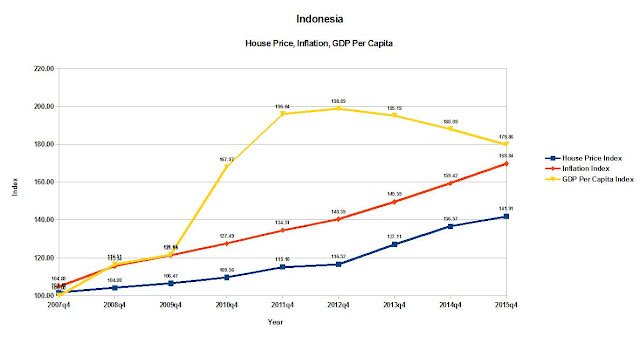 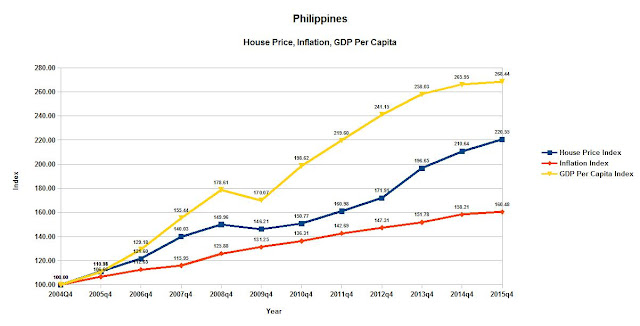 This indicates that ASEAN house prices, in general, may have more room to run if incomes continue to grow and that growth is evenly distributed. As in most emerging economies, income and wealth inequality is rampant, especially in the Philippines. Read: One Major Reason for the Rise of the Vulgarian Rodrigo Duterte: Wealth Inequality
Posted by David Carl Grimes at 11:00 AM No comments: Links to this post

What Gives in the Philippine Real Estate Market? Sales Volumes Are Up Yet House Prices Decline in 2016

According to the Residential Real Estate Price Index put out by the BSP, prices for all types of housing grew by a marginal 0.3% year-on-year 2016, the slowest pace since the index came out in the second quarter of 2015. 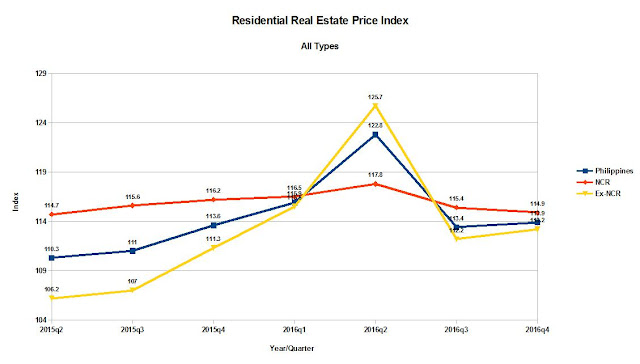 Metro Manila saw a significant 8.6% year-on-year decline in the single detached housing market. In areas outside the NCR, the decline was marginal - only 0.18% in 2016. Overall, the market for single detached homes declined by 1.00% in 2016.

Price declines in the duplex market were also very significant, droppng 12.32% in 2016 alone.  The NCR singlehandedly contributed to this decline, dropping 8.80% in 2016, more than offsetting all of the gains in duplex prices outside Metro Manila, which grew by a respectable 5.50% in 2016.

Much of the growth, therefore, is coming not from the over-saturated NCR, but from outside of it, indicating that the benefits of economic growth are spreading out to the rest of the Philippine economy, which could result in a much healthier real estate market.
Posted by David Carl Grimes at 11:00 AM No comments: Links to this post

Singapore's home prices have now been declining for thirteen straight quarters, which, according to Bloomberg, is the longest losing streak in five years.  Home prices are still  68.93% above their year-end 2004 levels. Overall prices levels, as measured by inflation have just increased by 28.97% since year end 2004.  In other words, for the past ten years, Singaporean home prices have outpaced inflation by almost than 40 percentage points. 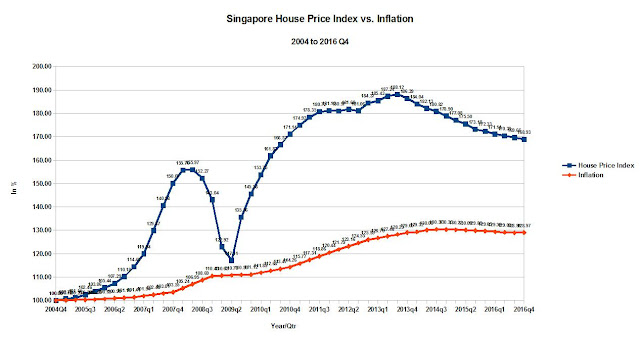 
In Thailand, which has been experiencing political turmoil for some time, home prices have remained essentially flat since the end of 2004. Home Prices ended 2013 with the index at 100.54, just 0.54% higher than the end of 2004, but showing a substantial recovery since the recent low of 74.08 posted in the third quarter of 2009. Since 2013, home prices have rebounded to 114.69 or 14.69% higher than its year-end 2004 levels, way below its expected inflation adjusted levels. General Price levels are 34.09% above their year-end 2004 levels. In other words, Thailand Home Prices have lagged inflation by as much as 19.40% since their year-end 2004 levels.

Posted by David Carl Grimes at 11:00 AM No comments: Links to this post